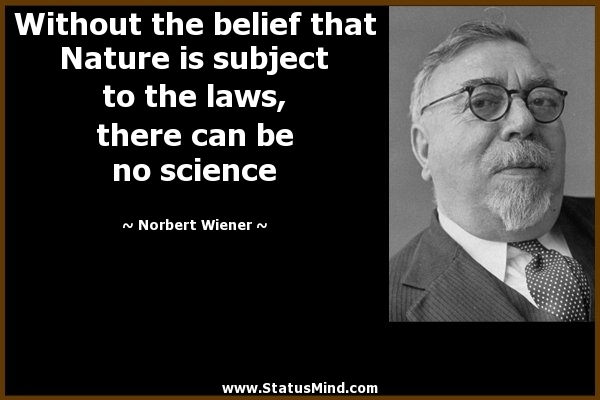 Wiener is considered the originator of cybernetics, a formalization of the notion of feedback

Wiener was born in Columbia, Missouri, the first child of Leo Wiener and Bertha Kahn, Ashkenazi Jews[citation needed] of Polish and German origin, respectively. Norbert Wiener became a famous child prodigy. Leo had educated Norbert at home until 1903, employing teaching methods of his own invention, except for a brief interlude when Norbert was 7 years of age. Earning his living teaching German and Slavic languages, Leo read widely and accumulated a personal library from which the young Norbert benefited greatly. Leo also had ample ability in mathematics, and tutored his son in the subject until he left home. In his autobiography, Norbert described his father as calm and patient, unless he (Norbert) failed to give a correct answer, at which his father would lose his temper.

After graduating from Ayer High School in 1906 at 11 years of age, Wiener entered Tufts College. He was awarded a BA in mathematics in 1909 at the age of 14, where upon he began graduate studies of zoology at Harvard. In 1910 he transferred to Cornell to study philosophy.

The next year he returned to Harvard, while still continuing his philosophical studies. Back at Harvard, Wiener became influenced by Edward Vermilye Huntington, whose mathematical interests ranged from axiomatic foundations to engineering problems. Harvard awarded Wiener a Ph.D. in 1912, when he was merely 17 years old, for a dissertation on mathematical logic, supervised by Karl Schmidt, the essential results of which were published as Wiener (1914). In that dissertation, he was the first to state publicly that ordered pairs can be defined in terms of elementary set theory. Hence relations can be defined by set theory, thus the theory of relations does not require any axioms or primitive notions distinct from those of set theory

In 1914, Wiener traveled to Europe, to be taught by Bertrand Russell and G. H. Hardy at Cambridge University, and by David Hilbert and Edmund Landau at the University of Göttingen. During 1915–16, he taught philosophy at Harvard, then was an engineer for General Electric and wrote for the Encyclopedia Americana. Wiener was briefly a journalist for the Boston Herald, where he wrote a feature story on the poor labor conditions for mill workers in Lawrence, Massachusetts, but he was fired soon afterwards for his reluctance to write favorable articles about a politician the newspaper's owners sought to promote.[2]

Wiener was unable to secure a permanent position at Harvard, a situation he blamed largely on anti-semitism at the university and in particular on the antipathy of Harvard mathematician G. D. Birkhoff.[6] He was also rejected for a position at the University of Melbourne. At W. F. Osgood's suggestion, Wiener became an instructor of mathematics at MIT, where he spent the remainder of his career, becoming promoted eventually to Professor.

In 1926, Wiener returned to Europe as a Guggenheim scholar. He spent most of his time at Göttingen and with Hardy at Cambridge, working on Brownian motion, the Fourier integral, Dirichlet's problem, harmonic analysis, and the Tauberian theorems.

In 1926, Wiener's parents arranged his marriage to a German immigrant, Margaret Engemann; they had two daughters

Many tales, perhaps apocryphal, were told of him at MIT, especially concerning his absent-mindedness

Unlike many of his contemporaries, Wiener was not invited to participate in the Manhattan Project

He shared his theories and findings with other researchers, and credited the contributions of others. These included Soviet researchers and their findings. Wiener's acquaintance with them caused him to be regarded with suspicion during the Cold War. He was a strong advocate of automation to improve the standard of living, and to end economic underdevelopment. His ideas became influential in India, whose government he advised during the 1950s.

After the war, Wiener became increasingly concerned with what he believed was political interference with scientific research, and the militarization of science. His article "A Scientist Rebels" for the January 1947 issue of The Atlantic Monthly[11] urged scientists to consider the ethical implications of their work. After the war, he refused to accept any government funding or to work on military projects

Wiener was a core participant of the Macy conferences.

Retrieved from "https://system-of-knowledge.fandom.com/wiki/Norbert_Weiner?oldid=22455"
Community content is available under CC-BY-SA unless otherwise noted.