In the beginning, in “Problem Stated ”, we have said that according to the Marxist theory of state, “a state”, i.e. armed groups of men, is a product of class contradictions within society. It follows that if these contradictions sharpen, intensify, the size of the state apparatus should increase. Has this been confirmed by the experience of Germany and China?

What happened to the size of the German army after unification?

After unification, the size of the German army has decreased, to stay within limits imposed by the treaty about size of conventional weapons in Europe (mentioned above).

“During the Cold War the Bundeswehr was the backbone of NATO's conventional defence in Central Europe. It had a strength of 495,000 military and 170,000 civilian personnel.

As part of the German reunification process, under the Treaty on the Final Settlement with Respect to Germany (Two-Plus Four Treaty), which paved the way for reunification, the Bundeswehr was to be reduced to 370,000 personnel, of whom no more than 345,000 were to be in the Army and Air Force. This would be Germany's contribution to the Treaty on Conventional Armed Forces in Europe, and the restrictions would enter into force at the time the CFE treaty would. As a result, the Bundeswehr was significantly reduced, and the former East German Nationale Volksarmee (NVA) was disbanded, with a portion of its personnel and material being absorbed into the Bundeswehr”

However, following an increase of tensions between Russia and NATO, after the annexation of Crimea by Russia in 2014, the size of the German army was again on the increase:

“In 2015, as a result of serious NATO-Russian tensions in Europe, Germany announced a major increase in defense spending. In May 2015, the German government approved an increase in defense spending from 1.3% to 6.2% over the following five years, allowing the Ministry of Defense to fully modernize the army.[25] Plans were also announced to significantly expand the tank fleet to a potential number of 328, order 131 more Boxer armored personnel carriers, increase the submarine fleet, and to develop a new fighter jet to replace the Tornado.[26][27][28][29] Germany is also considering increasing the size of the army.[30]”

Hence, we see that the size of the army is governed by considerations of external, international politics.

But what about the size of the internal army, the police?

The dynamics of the size of police is Germany is hard to find. It seems to be classified information. The best that can be found is the size of the German police in the present, or recent past.

However, this means little, for it is well known that crime levels in the United States are higher than in Germany, or Ukraine.

Crime statistics are not as classified as the size of the police force.

“Since the Berlin Wall came down in November 1989, and barriers in Eastern Europe have been lowered, police have registered major increases in crime in eastern Germany and Berlin.

Berlin have experienced a growing number of burglaries, robberies, car thefts and the like.

Pickpockets also had a boom year in 1990. There were 15,469 such crimes, and 6,658 the previous year. Most pickpockets, Schinz said, were foreigners.

He said East Europeans, especially Poles, have been stealing cars and driving them back home. In 1989 there were 4,200 such cases and last year 6,600.”

The conclusion that we can make from such article is that it is Eastern Europeans and Turks who are responsible for the increase in crime, a clearly racist explanation. However, most of the sociological explanations offered by the capitalist-run media are racist, or what is the same, nationalist, in origin. For example, in the same way are explained civil wars in the former Yugoslavia, and now in Ukraine. For example, Alexander Tarasov, who pretends to be on the revolutionary side, offers us an explanation that there are 3 (!) distinct nations within Ukraine – Western, Central, and Eastern, - and the war on Donbass is a product of antagonisms between these 3 cultural entities.

But let’s come back to the crime statistics for Germany.

In a very good article “The Fall of the Wall and the East German Police”, by Belinda Cooper, we read:

“East German society, walled off against outside influences and thoroughly organized internally, enjoyed a very low rate of crime in the Western sense. 9 Political crimes were another matter.”

However, after the fall of the Berlin Wall, weapons were “taken from the stores of the East German army, the NVA, during the chaotic months of late 1989 and early 1990 ("Ansteigen," Die Polizei, October 1990: 287). Thus automatic weapons became widely available for the first time. Combined with the change in weapons laws in Berlin (see below), this created a major increase in lethal arms on the territory of what used to be East Germany that, in conjunction with the tensions described above, could only worsen the crime situation.

The sudden influx of Western currency and products resulted in increased shoplifting. Residential burglary and auto theft also rose (the East German Trabant and Wartburg cars had not been as attractive to thieves as the Western cars now owned by growing numbers of East Germans). Bank robberies increased following monetary union by as much as 87 percent (Skoda 1991: 44), as banks now dealt in Western currency and Western cars made safe, rapid getaways possible.

Purse snatchings increased rapidly until they almost matched the rate in the West. In addition, with the introduction of the West German mark in the East a new drug market opened up, though drug use did not rise as steeply as had been feared (Die Polizei, April 1990: 94).

According to the Federal Statistics Office, the number of deaths from traffic accidents climbed from 1,784 in 1989 to 3,330 in 1990. The report shows an 85% increase in traffic deaths on East German territory in 1991

Right-wing violence by neo-Nazis did not begin with the attacks in Rostock in autumn 1992 that shocked the world. It began as soon as the Wall came down, and quickly became a major issue for the police in the new states. East Germany 24 had a right-wing "skinhead" subculture even before the fall of the Wall; after it fell, West German neo-Nazi groups began to organize in the East, finding fertile ground among disoriented, often unemployed East German youngsters whose entire world had collapsed around them with the changes in the country.

Police and some local government officials openly admitted from the start that they could not cope with right-wing violence (Krall, tageszeitung, December 3, 1990; Schwart, tageszeitung, October 26, 1990; "Leipziger Neonazis," tageszeitung, July 3, 1991; Kaufmann, tageszeitung, May 6, 1991). They complained that too many police were leaving the force or being let go, creating even greater insecurity and hesitancy to act; that their equipment and materials were too primitive to deal with the new types of crime they faced (some police in Rostock apparently bought protective clothing in a local sporting-goods store during the autumn 1992 riots there); and that they were simply not equipped to deal with the problems that had hit the country, particularly those that result from social tensions--unemployment, racism, and the like (Neunzig, Rheinischer Merkur, January 4, 1991). There were also reports of police sympathy with right-wing attacks, particularly upon foreigners (Der Spiegel, May 27, 1991: 85; Siegler, die tageszeitung, June 28, 1991: 5), though this is more commonly mentioned in connection with the western German police.”

Next we come to the article "Crime and Justice in Germany. An Analysis of Recent Trends and Research" . On pp.5,6,7 we see 3 table explaining the crime situation in Germany from 1960's to the early 2000's. The general  trend is to the increase of the crime, although in 2000's the situation seems to have stabilized.

Stabilization of crime situation in Germany in 2000's, and even some decrease, is shown in Eurostatistics . 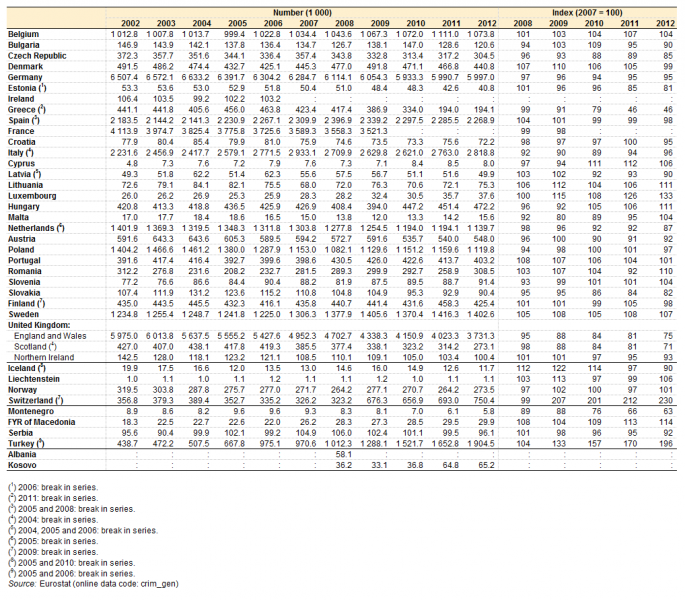 Crime rates soared in China since 1988, when the pro-democracy movement was repressed and capitalist reforms were introduced by Deng Xiao-Ping.

According to the book "Communities, Crime and Social Capital in Contemporary China" , by Lena Zhong, in 1988 there were approx. 827 thousand criminal acts, which meant the rate of 75 per 100,000 people, and the clearance rate was 75%.

Similar picture can be seen from "Inequality and Crime Rates in China" , by Yanrui Wu. We see a general increase in crime levels from 1997 to 2005.

In "China Daily" article from 2014 "Crime Rate Continues to Rise in Beijing" , we read:

"The crime rate in Beijing has been on the increase since 1997, although it did fall in 2008 and 2009, says a report by the College of Humanities and Social Sciences of Beijing University of Technology.

"Thanks to the Beijing Olympics in 2008 and 60th Anniversary of establishment of People's Republic of China in 2009, the crime rate dropped in those two years," said Zhang Jin, professor of law at the college.

The report, released on Tuesday, indicates that the crime rate in Beijing increased in 1998 by 411 percent on the previous year and the rate steadily increased in the next 10 years by between 49 and 78 crimes reported to the police per 10,000 people annually… Most of the cases were related to fraud and theft."

This means an increase of a struggle for personal possession of material things.

Size of the Chinese police force, as it changes over the year, is again a classified information.

Conclusions that we can draw:

2. Size of the internal army, the police, its dynamics over the years in response to important political events, is kept secret.

4. The police apparatus can not increase indefinitely, but must come to some limit, after which the society is bound to explode. The general explosion is most likely to be precipitated by an external war.

Retrieved from "https://system-of-knowledge.fandom.com/wiki/What_Happens_to_the_State_and_Civil_Society_After_Class_Contradictions_Sharpen%3F?oldid=12880"
Community content is available under CC-BY-SA unless otherwise noted.